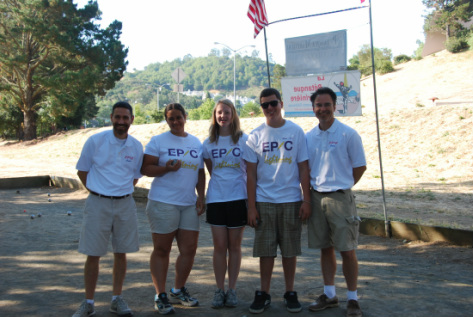 High School Beginnings-     In 1998, two French high school teachers Mike Stasack (then at Churchill now at South Eugene) and Ryan Baker (Marist)  started the first (and only) high school pétanque league in the USA and founded the Eugene Pétanque International Club (EPIC).  There are currently four high schools participating in the league - Churchill, South Eugene, Sheldon, and Marist.  They have two seasons, one in the fall and one in the spring.   Both boys and girls participate.  There are more girls than boys  in the league.   Mike and Ryan trained a junior team of two girls and one boy to compete for a chance to represent the USA at the 2011 World Junior Triples Championships.  The team took second behind a Fresno, California team.  However, international competition takes teams of four and Carly Stasack was chosen as the fourth player and she got the chance to go to Luxemburg to compete in the Luxemburg International Junior and Women’s Tournament held in July 2011.


Adults join in-    The adult side of the EPIC was started in the spring of 2009 by Mike Stasack, Ryan Baker, and Ray Peterson.  It currently has 20 members.   EPIC held the Eugene Open Tournament in 2010, 2011, and 2012 and drew teams from Portland, Southern Oregon, and Washington. Representatives from our club have won the 2010 National Triples Tournament, finished 2nd in the 2011 Regional Doubles Tournament, more recently, Jeed Chaiboonruang placed 2nd in the Northwest Regional Women's Singles Tournament.